Bördeschwein
The commissioned sculpture  was intended to reflect the traditionally close relationship and bond between agriculture and the town of Soest that has developed over the centuries.The sculpture “Bördeschwein” is intended to draw attention to this close relationship and to the importance of agriculture in our region; it should be recognisable as a pig. Without having modelled a pig before, I made a visit to the pig farm of “Haus Düsse”. After studying some pigs, my thoughts on the design began to crystallize and a name that could be used also emerged: “Bördeschwein”.
After considering a location near the “Schweinemarkt” (a place named after the medieval animal market in the centre of Soest ), only a limited possibility presented itself, e.g. directly at the entrance to the “Theodor-Heuß-Park” (a public recreational park). In the park there is “Der Dicke”, a popular sculpture for visitors of all ages. The artistic considerations on the form and surface texture of my pig referred to the design of this bronze figure. I see my pig as a complementary statement to this artistic work by the sculptor Christa Biederbick-Tewes.
My pig was not meant to be like a naturalistic anatomical depiction of a pig, but a generic interpretation of a pig, a young pig, that occurs in this region, with typically recognisable features such as large floppy ears, full hips and a typical curly tail.
A bronze pig was cast from a plaster model as shown. The desired size was already indicated at the initial project discussion, (approx. ½ life size). As a symbol it should be placed on a pedestal, and of course the local green “Anröchter” stone should be used for it. The height should be suitable for “big and small people” in order for the pig to function as a haptic object for stroking and touching . The smooth surfaces of the ears, head and torso lend themselves to being stroked in passing. The patination of the bronze then takes on a light sheen, in the course of time.
My pig, dynamically turned slightly on the base plate, tilts its head towards the passer-by with a intendedly friendly expression. It´s a nice little pig to make friends with. The pig poses no danger to the general public. On the contrary, it could become seen as a lucky pig.
© Atelier Richard A. Cox. The “Bödeschwein” was erected in the spring of 2022. 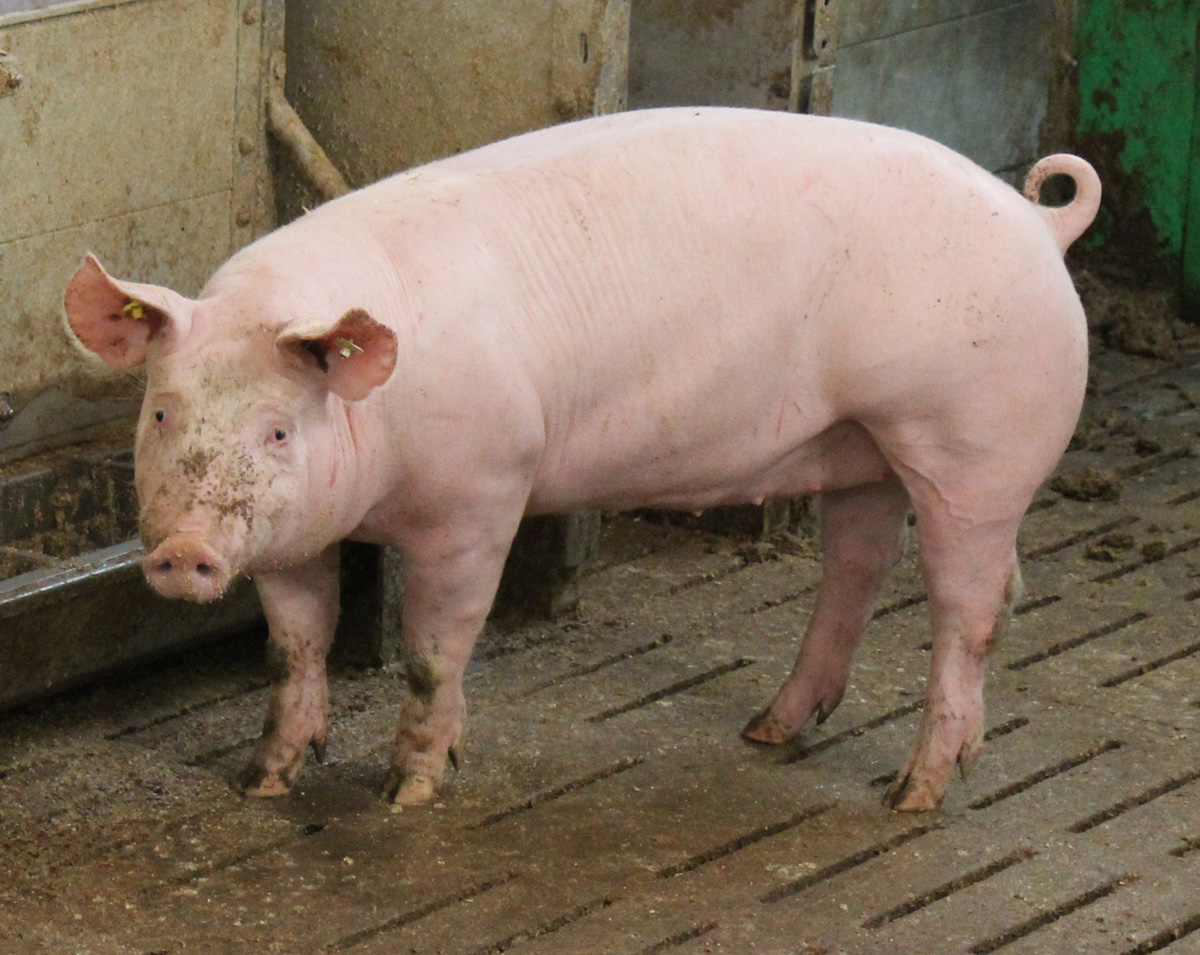 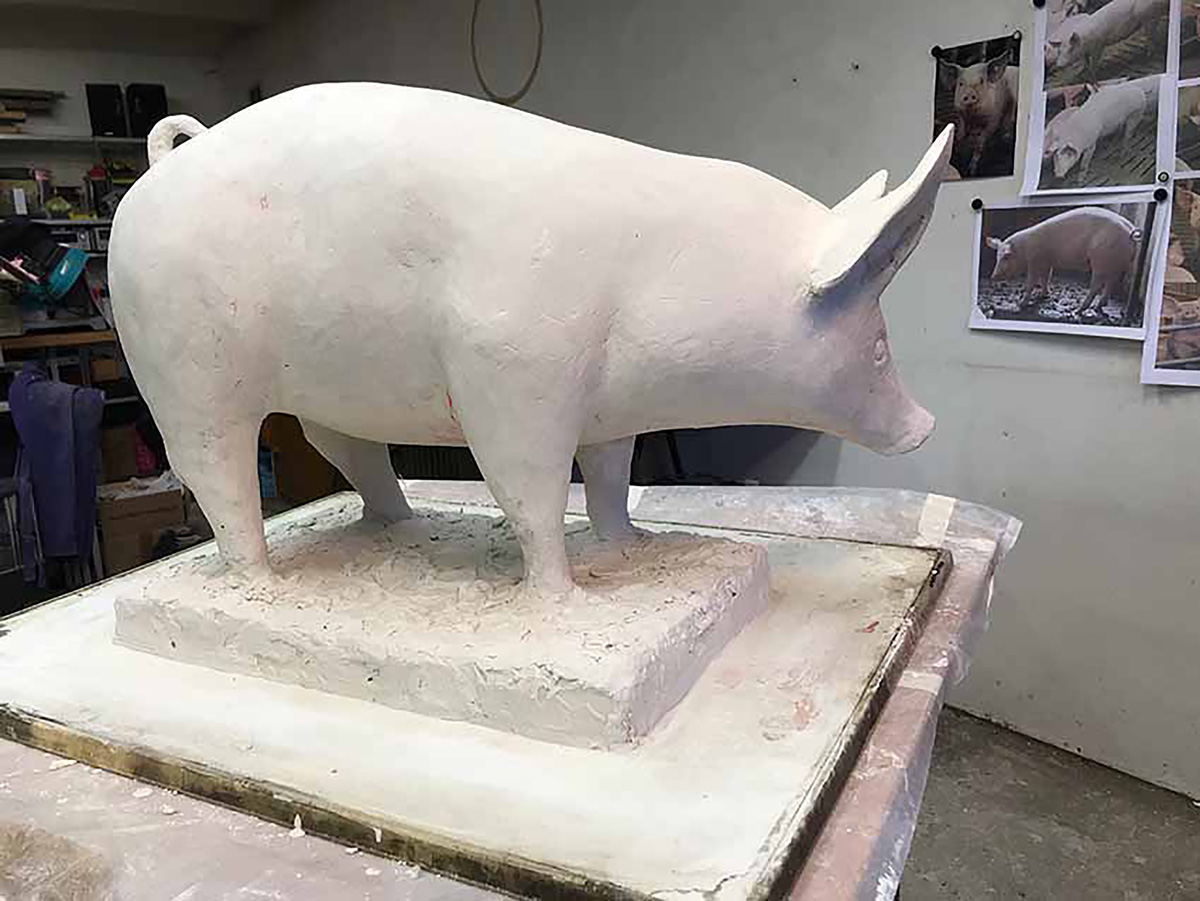 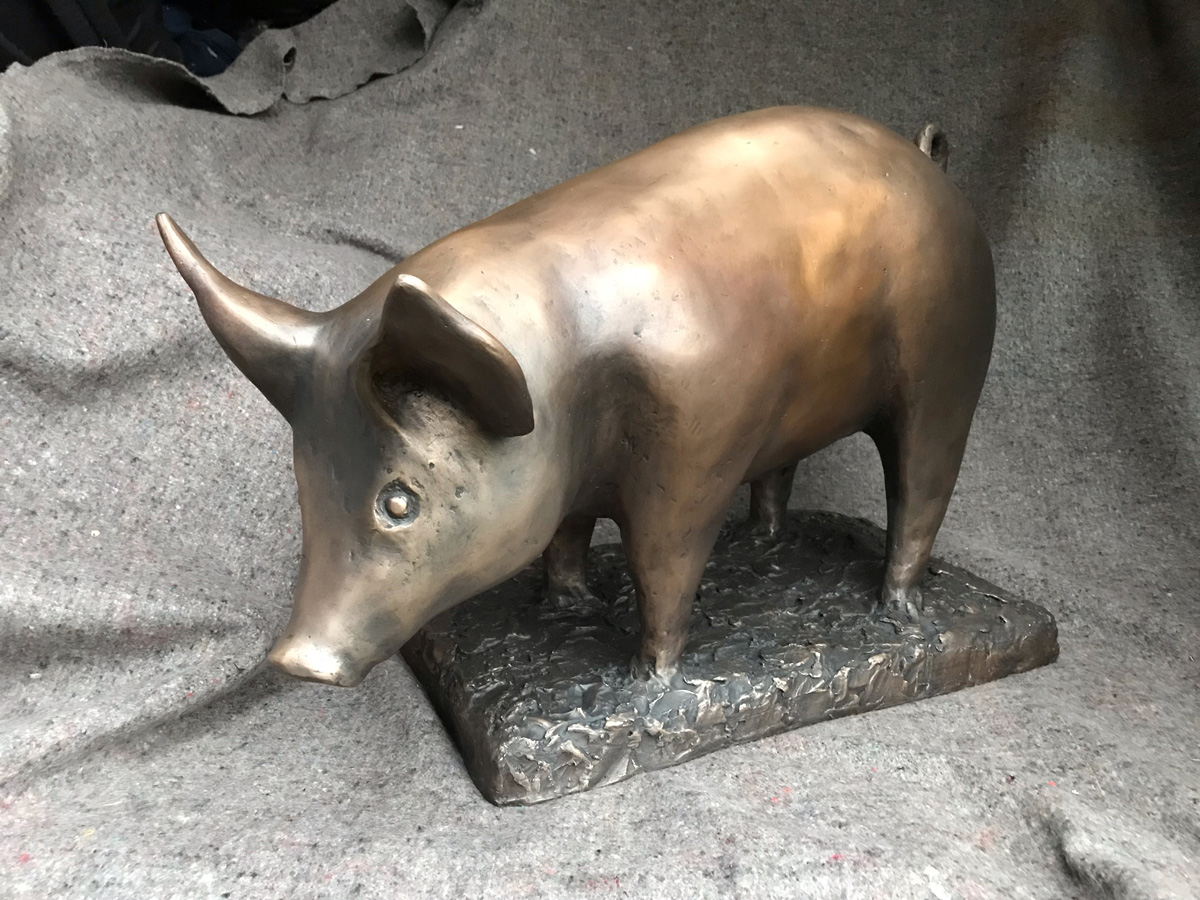 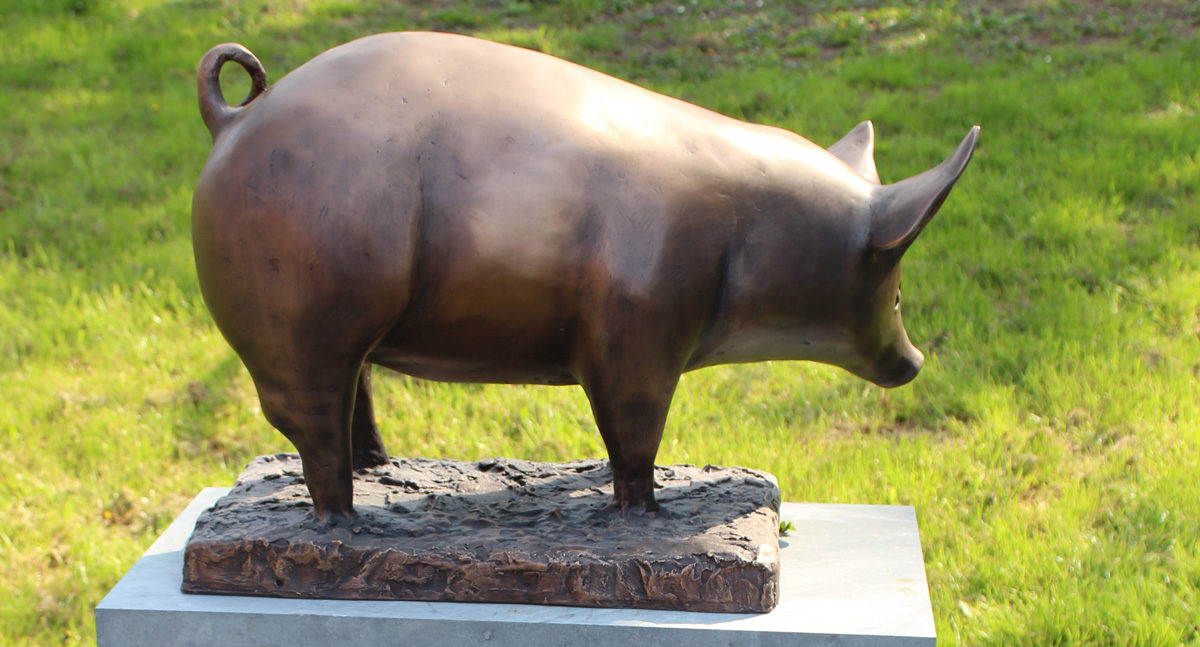 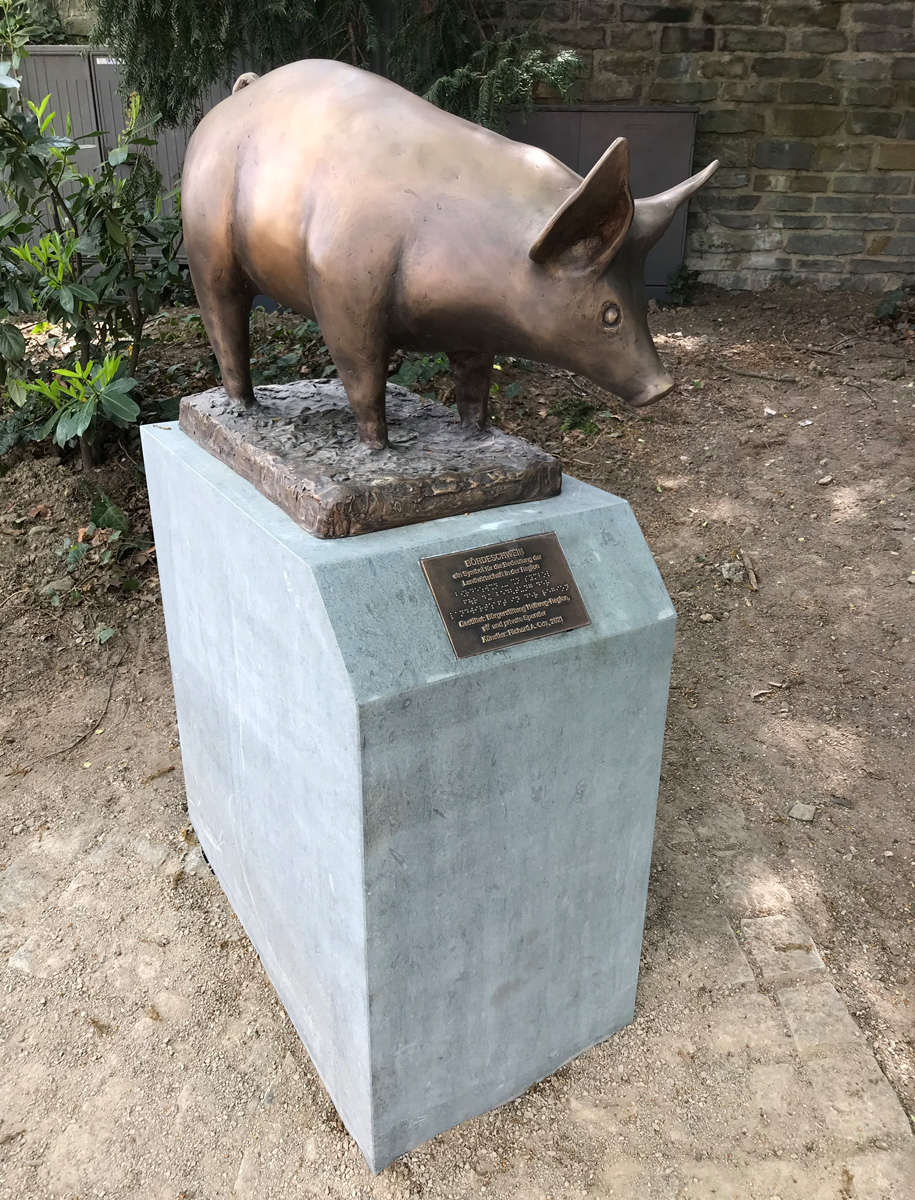 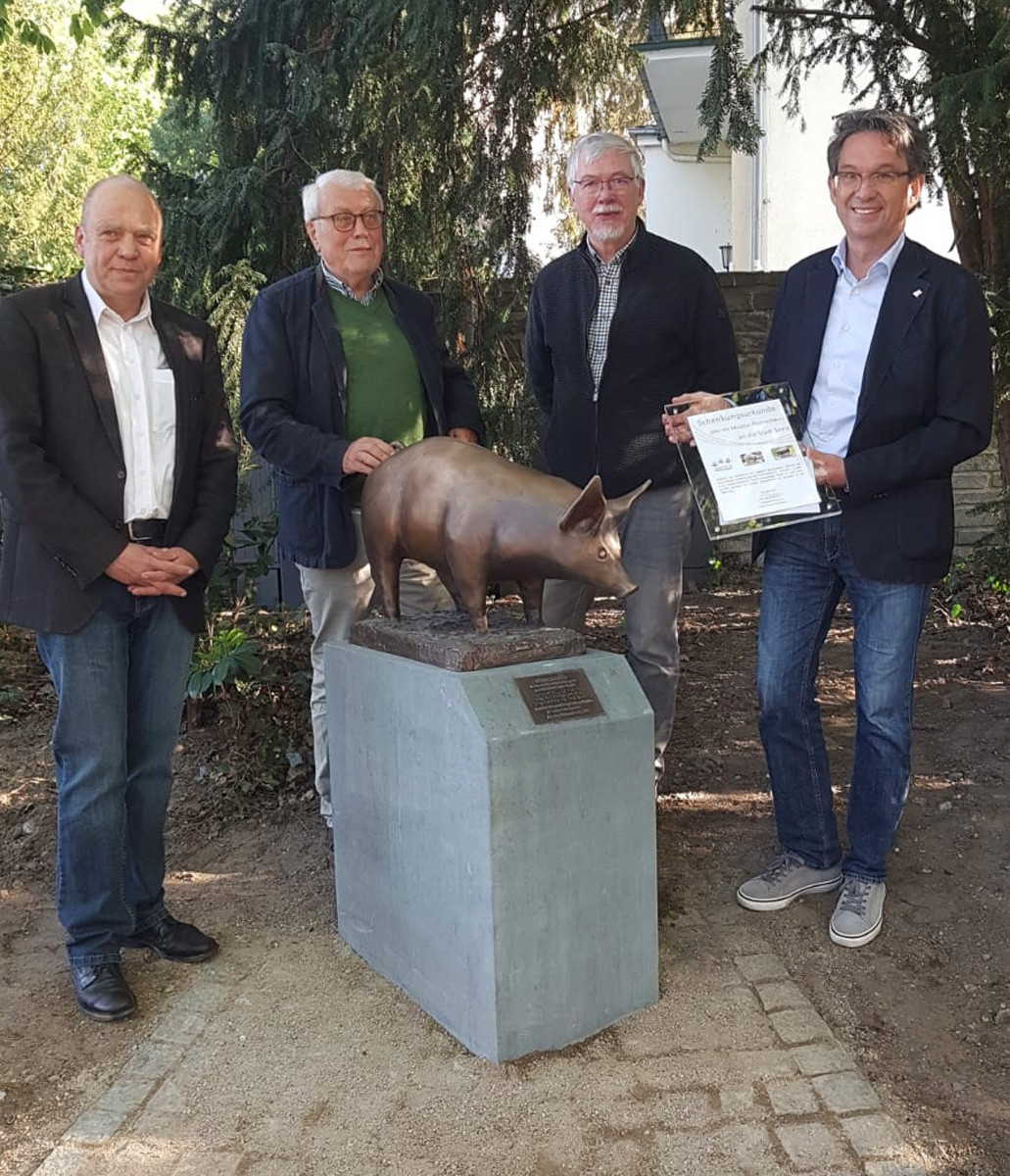 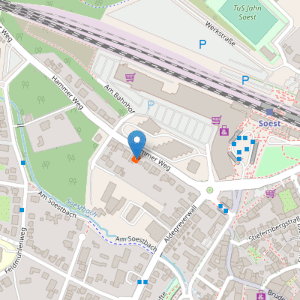